The first game reviewed by Android Target is this piece of art created by Rovio. After having tremendous success in Apple’s App Store, the developers thought that the Android community deserved their own version. Unlike the iPhone counterpart, Angry Birds for Android is free to download and play.

Regarding the structure, the game contains A LOT of levels, each one consisting of a 2 dimensional area where you have to throw a bird using a slingshot into different types of structures. The goal is to destroy the green pigs by hitting them, causing them to fall down or from falling debris. 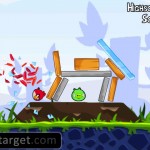 The physics involved when hitting different structures and materials is almost perfect. When planning your next hit you have to take into account the velocity of the birds, the explosions, the materials, the angle, gravity and so on. The direction of the bird is a little tricky to set. There are no line guides to help you here. However, starting with the second bird you use, you will see the path from the first bird as a dotted line.

There are 7 types of birds:

The storyline (yes, there is also a story behind throwing birds into pigs) is given by the small cut scenes that appear between the levels. The birds are trying to protect their eggs while the hungry pigs are always trying to steal them away.

Playing time is increased not just because of the 195 levels available but also by the score system and bonus levels (golden eggs). Every level has a number of birds you can throw. 10,000 points are earned for every unused bird. Also, destroying structures helps, but the biggest revenue comes from the spare birds. The golden egg levels require special actions for access (e.g. find and hit a hidden egg somewhere, or get 3 stars in the Poached Eggs category. 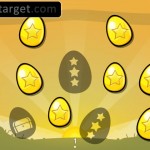 One observation about the advertising within the game: in the version reviewed here the developers changed the position of the ad block. It was moved from the bottom right corner where it was previously to the top right corner. This is a little frustrating especially when using the green bird because it is masked by the add. 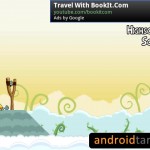 This is a must-have game. Period. On top of that it is a full version offered for free and will surely keep you busy for a few hours. And the amount of detail and care that was put into the development really sets it apart from most of the other apps in the Android Market.