We recently reviewed the Defender game from DroidHen. Here are some general tips and strategies to help you throughout the game.

There are only 4 types of common enemies in the game. Each has his unique characteristics and requires different handling.

The first one has an average speed, only as melee attacks and is easily killed.

The second is the fastest monster, but is rather weak. Shoot them in advance or they will get to your wall very fast.

The spiked monster has a hard skin which proves difficult to penetrate. They are the slowest but once they reach the wall it’s bad.

The fourth type is the only one with range attacks. It will only approach about one third of the screen before stopping and shooting green projectiles. When coming in packs these should be immediately frozen or dealt with in some other way, but before they get in range of your wall.

After each 10th level there is at least one powerful monster that needs to be defeated. They appear after all the normal monsters so you need to be prepared and have mana and hit points to spare when they come.

There are 2 types of powerful monsters: 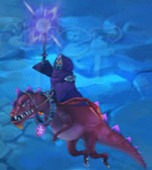 The first green orc has melee attacks and moderate speed. You need to have spells ready because each time you hit him with magic spells it gets knocked back to the right of the screen. It doesn’t matter how powerful the spell is to get that knock back effect so use only cheap ones, that don’t need too much mana. Apart from approaching the wall this monster also jumps up and down so keeping the jet of arrows towards him is difficult. The main trick is to shoot arrows and hit a spell just before he reaches the wall. The Power Shot skill helps a lot because it causes the monster to slow down and gives you additional time to recover mana and spells.

The second one is more powerful and has three different attacks. It can ram into the wall from time to time (and there is nothing you can do to prevent that), summon other monsters or shoot a jet of flames. It also is immune to the Power Shot skill. The most important thing to learn is how to prevent him from shooting the flames. Before doing so there is a short animation when he charges his star. If you hit him with a spell at that moment he will stop.