For all the gamers passionate about sport cars, Drag Racing is an enticing option. It features some of the world’s greatest and fastest vehicles, starting from Volkswagen Golf VI GTI all the way to Bugatti Veyron and Henessey Venom GT. All the cars come with individual specifications, handling and can each require some time to get accustomed to. The graphics are pretty good, being a drag racing game (racing in a straight line) there are no 3D objects involved. Check a more detailed review below.

You start off with a small amount of cash and an empty garage. It is up to you to pick a car for racing and move forward from that point on. The game has no ultimate goal, just the feeling of driving a more powerful car and competing with tougher opponents. 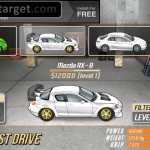 The actual play involves attention and experience with shifting gears. All the cars have a manual gearbox and it is up to you to pick the correct time to shift. The basics are: 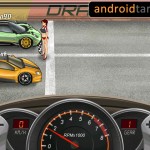 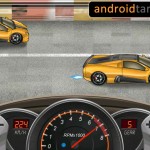 There are 2 resources in the game: cash and respect points. The first can be obtained by racing with an AI controlled car or with a prerecorded run by another human player. Notice that whatever the outcome of the race, you still get some money so there’s no way to become bankrupt. Respect points are received when you beat another player, you beat a boss (still AI, but harder than the rest) or you unlock some special features (such as having a perfect run). Cash is used to buy cars and upgrades while respect points are used to buy more powerful upgrades (alongside money). 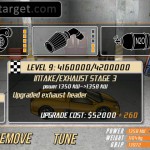 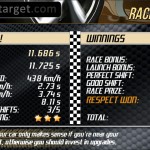 The game has an overall nice design. The cars look fine, but there is only one perspective shown at all times. The only car animations are the spinning wheels and the nitro flame from the tailpipe. You can also customize the main body color in exchange for some respect points. No upgrades alter the car aesthetics in any way.