For all of you wannabe construction engineers that spent hours trying to build the most awesome bridge in Pontifex history, it’s time for the small screen to challenge you once again. X Construction is the name of the bridge building game designed for Android. Using 3 types of materials you will be chosen to pick the best geometrical shapes, to analyze stress and to make sure those damn train passengers don’t fall off and scream like hell!

Starting with the game’s interface there isn’t much to say. You are greeted directly with a list of 21 construction levels, each with 3 levels of difficulty. Difficulty is only measured by the weight of the train. The advancement to the next level is not possible until you complete the previous one. There are also 10 levels called sandbox, where there is no limit on the number of materials at your disposal. 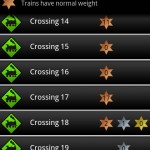 The materials available for construction are ropes, girders and concrete. Ropes are flexible, light, can bend and are significantly longer than the pieces of concrete or girders. Girders are strong (but not as strong as concrete). You can only lay out the railway (the surface where the train rolls) using girders. Some levels (including some from sandbox) do not provide you with all 3 types of materials.

Although the graphics are pretty basic and could certainly use a more eye-candy feel, the game is addictive and fun. The trains vary in the nuber of cars they pull along. One level even has 2 trains crossing at once (second screen shot). Laying down materials is not as difficult as it may seem at first. There are circle guides that help you pinpoint the exact placement and snap into position.

Some levels even bend the physics (and logic). For example Crossing 20 (last screen shot) & 21 have an elevation difference between the left and right anchor points. This does mean you should let the train fall gently onto the next cliff. Just use your imagination and remember that the goal is to get the train to the other side: it doesn’t matter how. 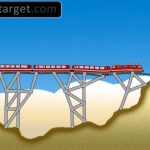 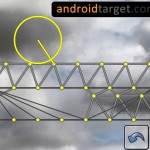 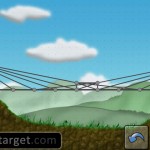 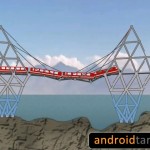 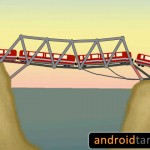 This is a great game, especially if you have played Pontifex in the past (if not, download the free desktop version at http://www.chroniclogic.com/pontifex.htm and give it a try). The only thing I can complain about is the small number of levels (21 basic and 10 for sandbox, each with 3 levels of difficulty). Hopefully the developers will add more in later updates, but until then it’s a pretty short game. Otherwise, it’s a great value for 1 EUR.

There is also a free version of the game, called X Construction Lite which has even fewer levels. You should at least give it a try if you are not willing to buy the full version.